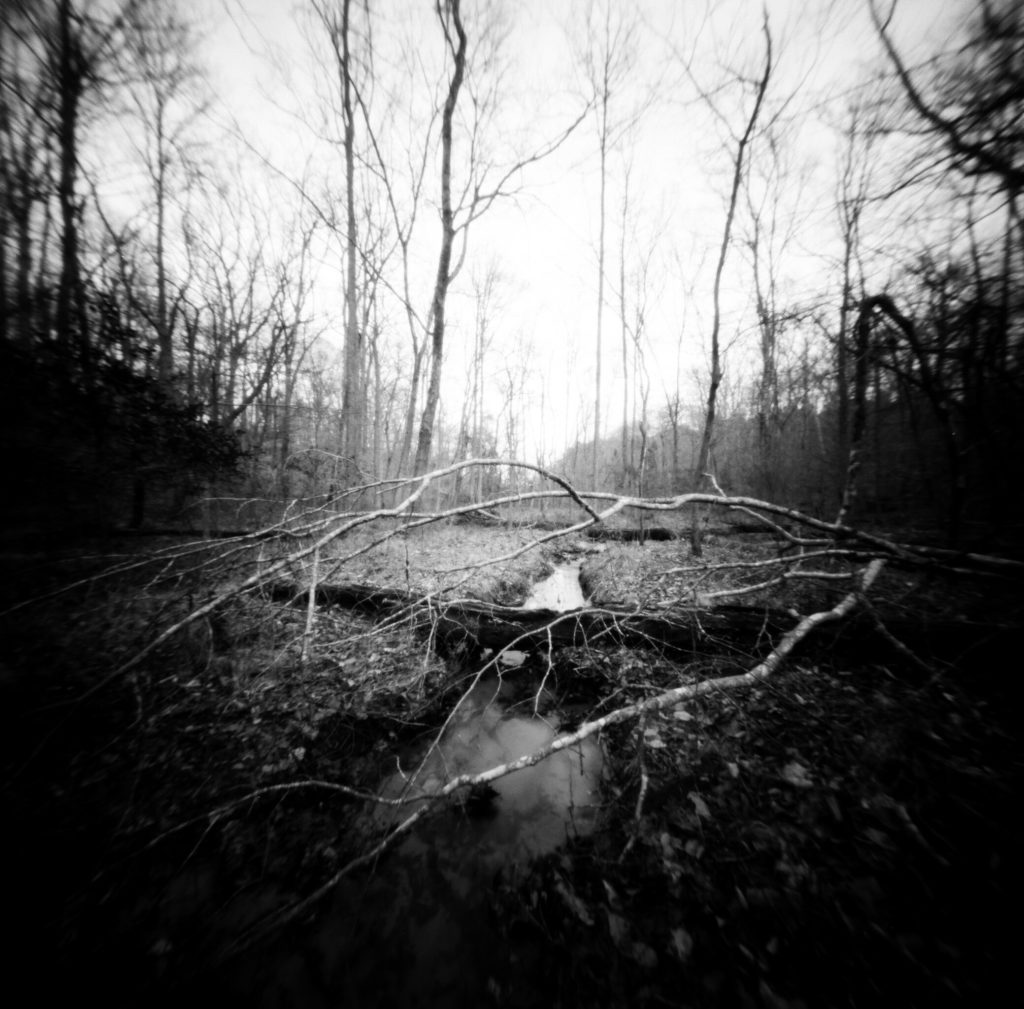 Technology is amazing! Just in the 9 short years I’ve been involved with photography, digital cameras have advanced a great deal. At that time, Canon and Nikon were the big dogs and the 5D Mark II had just come out with HD video capability – it changed the way we looked at our cameras from that point forward. Now, if a pro rated camera doesn’t have 4K video, external mic connections and 30+ megapixel resolution, people scoff at it!

So you might ask me why with all the digital advancements, why would I be intent on going back to the beginning? Back when the camera was merely a light capturing box with no mechanical or electronic parts? Just look at the images in this article and you might understand, although some of you may still wonder it afterwards.

The images displayed here were taken with a new pinhole camera. That does sound like an oxymoron doesn’t it, a new pinhole camera. Pinhole cameras were some of the first created and are of the simplest camera technologies. A lens about the size of pinhole with a door over it, encased on a light-tight box with film film behind the lens. That’s pretty much it! The lens may be small, but it’s very wide and has a crazy depth of field – nearly everything in the field of view is in focus. Exposures are really long, there’s lens distortion and dark vignetting – many photographers didn’t like these qualities in an image long ago, mainly because people don’t look so good in them, thus the continued innovation in the technology. But for a guy like me, who loves those characteristics in landscape images, these cameras are right up my alley! 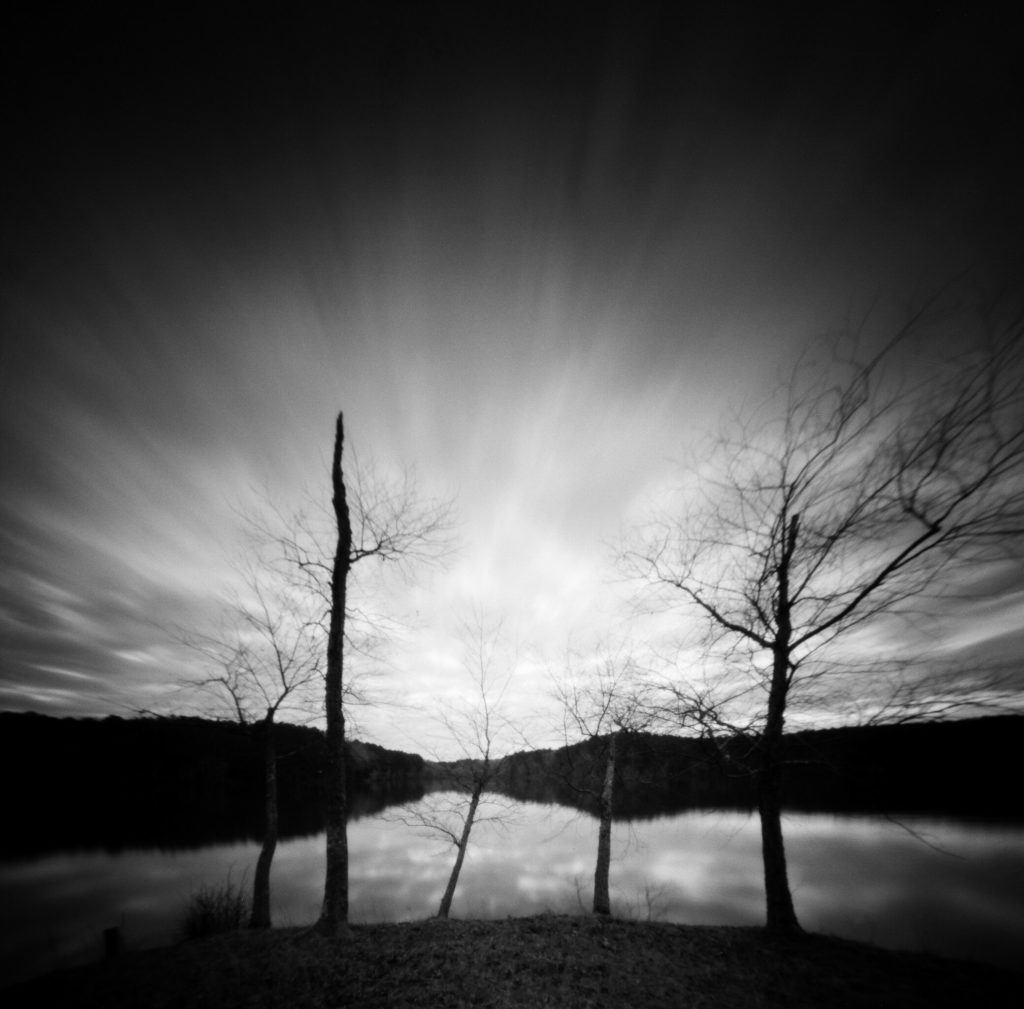 What Triggered The Pinhole

Since getting back into film over the last year, one thing that kept escaping me was the ability to take long exposures, especially with my medium format camera (Pentax 645). It’s capable, but I do not have a remote release for it and the only lens I have is a 75mm f/2.8, which equals out to about a 50mm for 35mm cameras. Wider lenses were going to cost a few hundred dollars, so I never really looked into anything much.

Thankfully, the film photography community is awesome at sharing awesome pics AND communicating details about them. Several folks were sharing these incredibly moody, long exposure images and low and behold, they were taken using a pinhole camera. Doing my own research on the net, it was apparent that there were a number of options for custom built, brand new pinhole cameras on the market. Companies like Zero Image and Ondu make handcrafted wooden pinhole cameras, and there are many custom built options out there as well – you can pretty much make a pinhole camera out of anything that can be made light leak tight!

The camera most recommended in my Twitter circles was the RealitySoSubtle 6X6 manufactured by James Guerin of Au Premier Plan in France. There are several versions of the RealitySoSubtle and they are all made of high quality material on CNC machines. They’re solid, too! Once Santa came around last year, I asked for one and he delivered!

To give you a better understanding of how to operate this particular pinhole camera, I’ve put together a short video – take a second and check it out.

As you can see, the Pinhole Assist App is a huge asset here. Based on the first roll results, at least to my eye, it’s spot on accurate too! The app comes preloaded with numerous types of pinhole cameras and standard production films, and it lets you build combo presets so that if you use common cameras and stocks, you can switch between them easily!

Even with the site lines on the camera, there’s still quite a bit of unknown in the composition, especially the first time through. For instance, the difference between the bottom and top pin was unknown to me, so I just guessed at it. Good news is, it was obvious in the images which was used. Take the image above from Pin Oak Lodge. There’s a lot more sky and very little foreground in front of the trees – obviously the top pin. In the image below, the limb is very prominent in the foreground, meaning that this image was taken using the bottom pin. Based on these results and my typical likes in taking pictures, I’ll likely use more of the bottom pin than the top one. 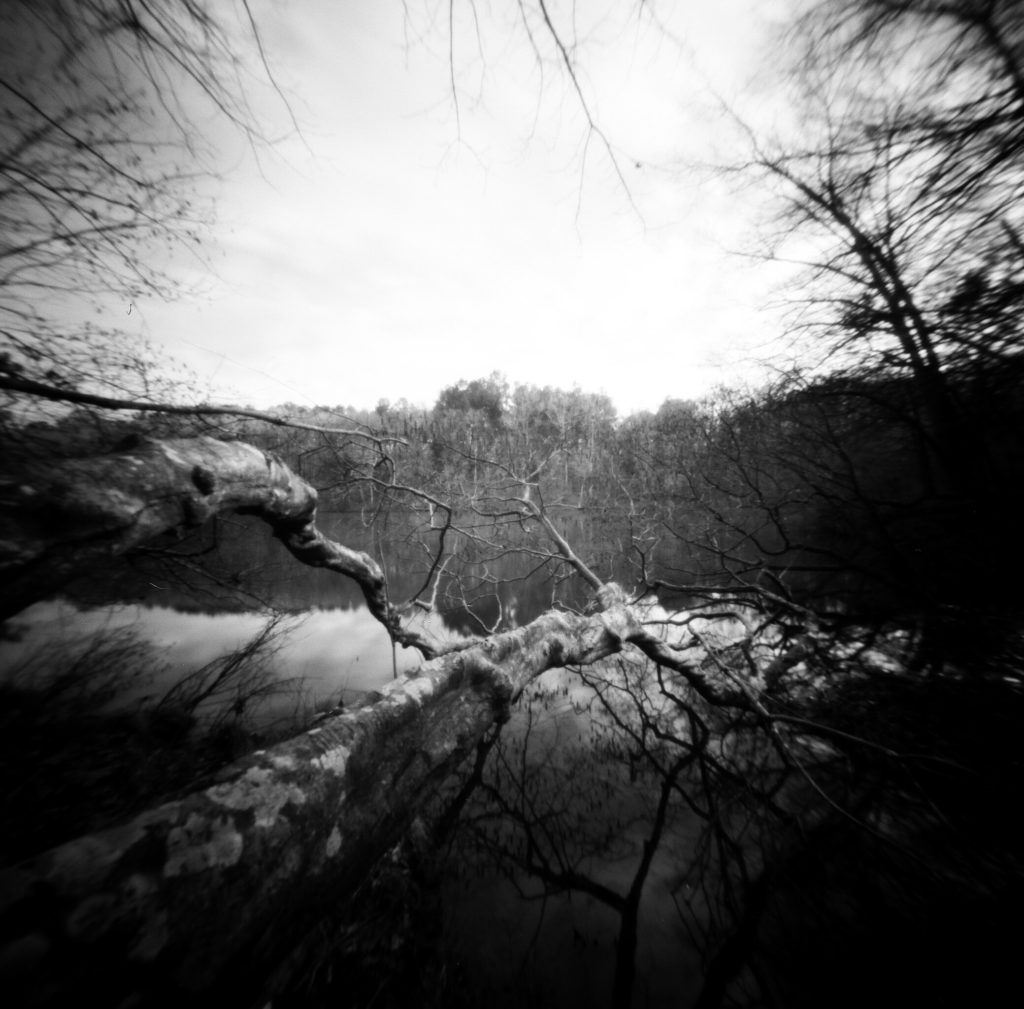 The nature of this camera makes it very much a niche tool. For someone like me who loves moody, long exposed, black and white images, this is a natural fit in my bag. However, as wide as the lenses are, as well as the heavy vignette and distortion, it’s likely not a camera for portraits or anything moving, unless you’re wanting to show the movement, although, it’s hard for me to put limits on people’s creativity!

It’s also not for the impatient. Even though there is no menu system, settings, focus or any other knobs or switches, the set up should be one of determination and intent, especially being that there are only 12 shots per roll of 120 film.

Good news for any photographer, the camera (this one anyway) is so small and handy that it can fit in just about any open space in your bag, as long as there’s room for film and a tripod! There are many other designs, however, that are rather large and much more bulky to carry around.

More than anything, it’s fun and anyone who wants to add more fun to their photography experience could use this camera! 12 shots on the first roll went quickly for me and I’m already seeing many more compositions to grab, even right around the house! 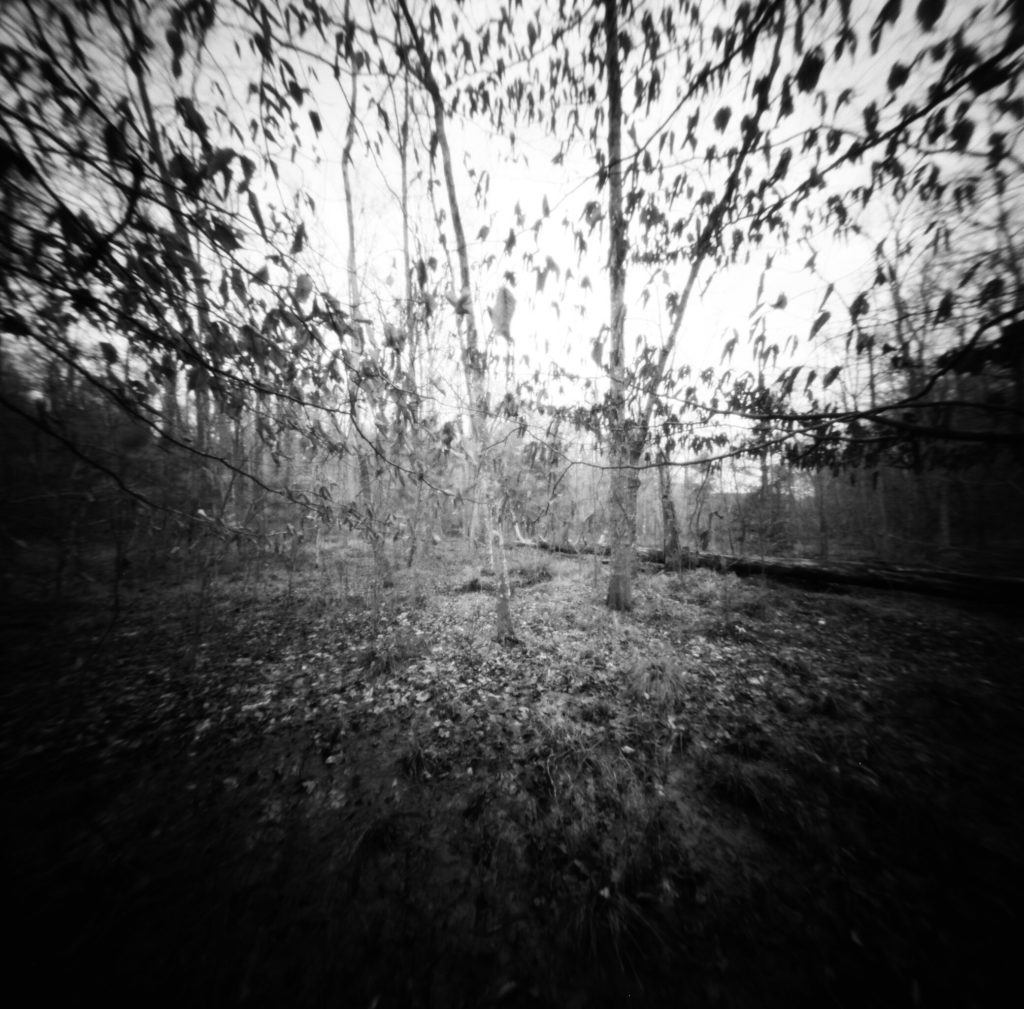 As the video above showed, the camera is locked, loaded and ready for some more exercise! If the next rolls show the kind of improvements I’m expecting from the lessons learned in the first roll, I’ll likely get rid of my Pentax 645 and use my pinhole as my exclusive medium format film camera. The Pentax is a fantastic camera, but it’s huge and I can’t easily pack it on trips due to it’s weight and how much space it takes up. With this camera and my Minolta 35mm, I could literally carry both cameras and film with me on any trip I make!

The next roll will include even more fine tuning of understanding just how much can fit in the frame of these wide lenses and maybe yield a better knowledge of how the top and bottom pins differ! As with any tool, practice helps to perfect the process and images!

One thing’s for sure, this classic, but new, pinhole camera looks to be just the ticket for producing the images that are waiting right behind my eyes!