One of the things you have to consider when attempting to create your first HD DSLR video is knowledge. What do you need to know and where can I find that knowledge? Well, to summarize why I’m even asking, let me give you the premise for this series.

It’s been more than two years now since the release of the Canon 5D Mark II and Vincent Laforet’s film Reverie, which really blew everyone’s doors off. For some, the camera was the greatest thing to hit their lives and they ran with it. This series is for the rest of us who bought these cameras and did little if anything with their film-making capabilities.

I know that I had all these grand ideas about what I would shoot when I just figured out how to use it. The more people I interviewed about it for the LensFlare 35 podcasts, the more daunting it became for me personally. I quickly found out that all the settings I had used to capture those first video segments were ‘wrong’. Then, I started hearing about all this extra gear I needed just to shoot video, THEN it was the fact that I needed assistants, had to change out the type of lighting I owned, had to ‘think’ like a film-maker and storyboard everything out first; I needed a more powerful computer AND expensive software to edit it and…did I mention audio? How important it is to have the correct gear, how to record it, how to sync, it, and on and on.

So, I listened and did a LOT of learning from all the people I interviewed, but it was a jumble in my mind. Finally, I decided to get more serious about it and to turn out my first video by studying just a small sampling of the knowledge that is out there. Let’s face it, you type this subject in and Google is going to give you 20 million links to follow. Really? Do we have time for THAT? So, just  a random search was out of the question. 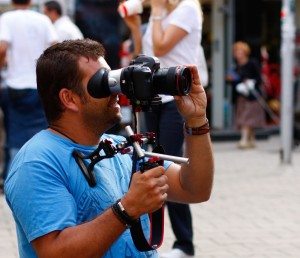 Philip Bloom on location in Bulgaria

Then, I thought of the Kelby Training guys. They do some great stuff, but at the time I thought of this, they didn’t have a LOT of courses online for video. Next, I had heard of some DVD’s that Philip Bloom and the F-Stop Academy guys had put together. They had just come out with one that was for the 5D, and then immediately followed up with a version for the 7D. I reviewed them, but they were EXPENSIVE! (they are now MUCH cheaper) Fortunately, they had given me copies at no cost to do the review, so OK, I got them, they were good, but it didn’t spur me to make that first great film.

Next I looked around for a really good book that would take me through the whole process from A-Z. Well, James Ball, Robbie Carman, Matt Gottshalk and Richard Harrington came out with a great one called From Still to Motion. Here was a guide that would take you on a journey with a thorough exploration of the video-making process — from pre-production to post — while easing your transition from still to motion. Four veterans who speak the language of both photography and video fluently taking the time to share their knowledge with a clear, instructive approach; they quickly get you up to speed on everything from picking your gear, to properly lighting for motion, to using professional-level audio, color correction, and editing techniques, to media management and outputting, and much more. Here are just a few highlights from this richly illustrated, completely interactive book and DVD which has become my favorite resource: 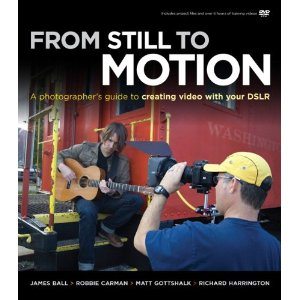 The accompanying DVD contains over 6 hours of video training that delves deeper into each topic, as well as high-definition footage, hands-on project files, and templates to experiment with and follow along.

OK, so would this be the book that gets me out there shooting? Well, guess not, because I bought it, starting reading it and STILL didn’t start a project.

Next up was a NEW series of DVD’s from the F-Stop Academy guys and one that really spurred me on was called DSLR Video on Assignment with Dan Chung. I had been trying to get Dan on the show for awhile, but he’s a busy guy. He’s also an award winning photojournalist and filmmaker. In this DVD he spends two hours showing you exactly how to approach a DSLR video assignment filmed in Malaysia while on a real assignment. For some reason, I was hooked. Maybe it was seeing a real project go from end to end, maybe it was his style, maybe it was the explanation of how he used the equipment, but in the end I said “I can do this.”

So, here we are… I’ve gone back through all these different sources and taken notes. I’ve really narrowed things down to EXACTLY what equipment I need, what I can build, and what story I want to tell with this camera. Next stop….what will I buy to make the first project happen? 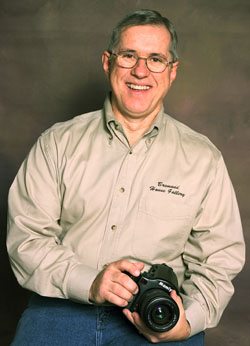