A lomographic camera is perhaps the pinnacle of grunge photography. Similar to the Holga, the Lomo camera produces unique results that are unique and specific to each individual camera. Specifically, the Lomo will typically produce images that are of selective focus, over or under exposure, indense off-center vignetting, and over saturation. 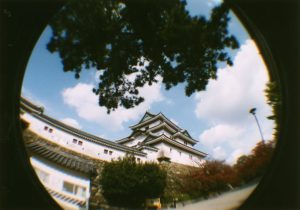 Shown here is an example of an actual photo taken with a Lomographic camera using a fisheye lens.

Just like all the ‘rules’ of traditional photography, the Lomo community has adopted their own set of rules for taking photos with a Lomographic camera. The list of rules, which can be found on almost every Lomo website is as follows. My favorite rule has to be #10; don’t worry about the rules.

One of the greatest advantages of digital photography is the ability to transform any photograph into something more creative. For example, even high-end cameras can produce stunningly beautiful photographs that with a little manipulation, can be transformed into more creative images. I’ve heard some people criticise this process as taking photographs from very expensive cameras, and turning them into images that look as if they were taken with a $20 camera; apparently, a select few critics cannot appreciate creativity if it results with images similar to those taken with a ‘toy’ by comparison. Despite the competition to have the person on the block with the most number of megapixels, there is still a small market for Lo-Fi photographs.

The Lomography movement currently has a lot of available information, specifically centered around Lomography.com. Since there are a multitude of steps necessary to create a Lomo-Like image, and there are so many different options available, I’ve decided to forgo the step-by-step instructions and simply provide links to a few Gimp, and Photoshop actions, many of which are free. In case you’re wondering, the above photo was given its Lomo-like editing using the Photoshop Lomo action from Addicted To Design.

A multitude of Lomo actions and scripts are available, and can be found by doing a quick Google search. The following are just a small handful of examples of what is available. There is even a Flickr group (I mention Flickr a lot; if you’re not on Flickr by now, you probably should be).