Everything You Ever Wanted To Know About The Holga 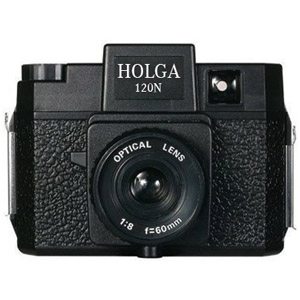 The Holga is a medium format 120 film toy camera, made in China, known for its low-fidelity aesthetic. The Holga’s low-cost construction and simple meniscus lens often yields pictures that display vignetting, blur, light leaks, and other distortions. The camera’s limitations have brought it a cult following among some photographers, and Holga photos have won awards and competitions in art and news photography.
–Wikipedia

Back in the days before I had the money to invest in a high-end digital SLR camera, I would spend long nights, sometimes hours at a time in the darkroom, developing that days film. I was addicted to 35 mm film, especially black and white. I clearly remember reading about the Holga on the Internet, and I just had to have one.

For those of you who may not be familiar with the Holga camera, it is marketed as a toy, but for those who have ever taken photographs with one, it is anything but a toy. The Holga camera uses 120 mm film, which is many times larger than the common 35 mm film that is most popular in the United States, and instead of having around 30 exposures per roll with 35 mm film, the Holga’s 120 mm film yields between 12 and 14 exposures per roll.

120 mm film can be hard to obtain, especially for a beginner. Amazon.com has become the quintessential supplier for such film, and for those who develop their own film and prints, Amazon.com has quite arguably the best selection around. Developing 120 film can be expensive if sent to a commercial film processor; I was lucky enough to have access to a home darkroom, however the cost of the chemicals (which require special disposal) and time required to process the negatives and print the photos can be intimidating. On a side note, color film is also available, and can be processed in black and white chemicals, which of course, results in black and white negatives.

When the film is developed, the photographer should expect to see light leaks, soft focus around the edges, and unpredictable and sometimes interesting effects. The entire camera is made of plastic, including the lens. There is no zoom lens, and focusing is done on a haphazard scale that can only be moderately accurate at best if the camera is paired with an experienced user. What is most striking about the Holga is that each one is unique, and no two cameras are alike; almost as if the cameras had their own individual identities, every Holga will have its own signature light leaks and eccentricities.

It should be noted that the original Holga 120 has no flash, but one can be added since there is a hot shoe; some newer models have build-in flashes. The Holga I had was the original 120, though I was able to modify it to use 35 mm film. Also, there is no automatic film advance, so each time a picture is taken, the photographer must turn a wheel to advance the film. I made several other modifications to the camera, such as adding electrical tape to cut down on some of the light leaks, adding a bolt to the underside so that it could be used with a tripod, and finally, painting it bright yellow. None of these modifications are recommended, however. Thankfully, today there are Holgas made out of a variety of different colors of plastic, and some even manufactured to accept 35 mm film and mount on a tripod.

The following photos were found in the Flickr Group called Holga, which at the time of this writing, was the largest Flickr group about this subject.

You may also be interested in my article Secrets of Lo-Fi Photography.